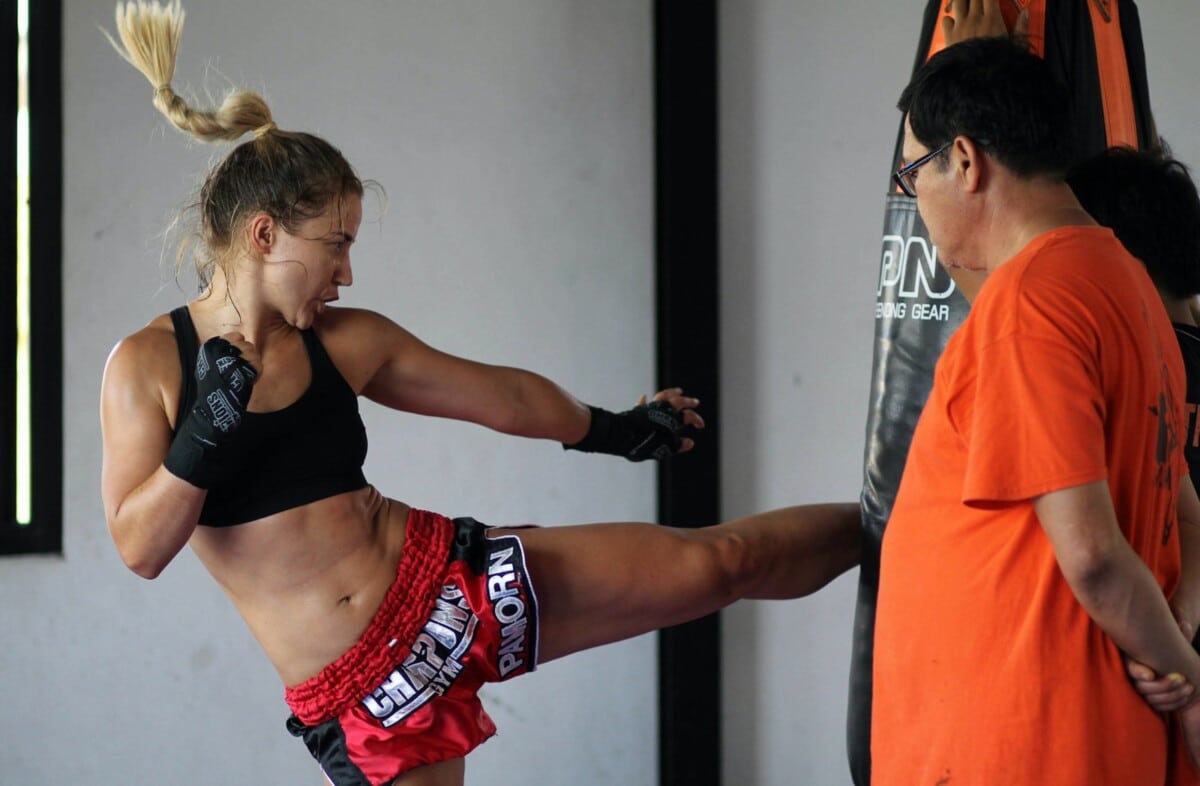 There are many different martial arts to choose from when you are looking to start MMA or just to learn some effective self-defense techniques. With a multitude of disciplines, it can be hard to select the right one. If you have narrowed it down to Muay Thai vs Taekwondo, then here is all you need to make the right choice.

While these two fighting styles are similar in certain aspects, such as the disciplines being created from strong cultural influences, there are also plenty of differences. When choosing a fighting style, it usually comes down to the intent of why you are learning to fight, as well as personal preference.

Providing you with a compact overview of each style will make your decision much easier. Here is how the two disciplines weigh up against each other.

The Main Differences Between Muay Thai Vs Taekwondo

Taekwondo was first developed in South Korea using elements of other fighting styles, including karate, Taekkyon, Subak, and kung fu. This fighting style was created as an unarmed fighting style and is known as the oldest martial art in Korea.

The dynamics of this fighting style are extravagant, as fighters use several well-timed kicks that include jumping and spinning kicks. Making it one of the most entertaining martial arts for spectators to watch. Fighters also need to perfect hand strikes even though they are used secondary to kicking techniques.

Even though the Korean Taekwondo Association was established in 1959 to unify the fighting styles into one approach, the techniques are believed to have been used as far back as 50 BC. Taekwondo was developed by three kingdoms in Korea, namely Baekje, Goguryeo, and Silla.

The techniques were used to help young men improve their agility, stamina, strength, survival skills, and speed. These men who practiced this form of unarmed combat were called Hwarang. When the Japanese military occupied Korea in the early 1900s, the fighting style was banned.

While certain individuals continued practicing it in private, the style was formally reintroduced with an influence from Chinese fighting styles in later years. Taekwondo is loosely translated as “the way of the hand and the foot”.

Taekwondo is well suited for structured fights due to the extravagant style of the combat techniques and the stricter rules set out by fighting federations. While the combat style may not help much in a street fight, understanding the fundamentals can assist you if you combine them with other styles.

Fundamentally, fighters need more room when using Taekwondo techniques due to the counterstrikes and kicks, which are well-known around the world. The dynamics of this sport have also resulted in it being one of the only six martial arts included in the Olympic Games.

The focus of this discipline is on speed and stamina rather than strength, so fighters who may not have a strong build can still come out on top on the octagonal field. Fighters are taught early on to conserve their energy between strikes by learning how to relax fully.

The rules of Taekwondo may differ slightly in various competitions, but the standard rules across the board are set by World Taekwondo. These include the following:

As the PSS is attached to fighters’ clothing, it notes the following points for landed strikes:

Taekwondo fighters need to wear standard uniforms according to the competition they are participating in. They also use a large range of protective gear due to the nature of the extravagant kicks used in the sport.

Although they usually compete barefoot, the fighters use protective footwear during training. In competition and training, fighters may use mouthguards, forearm guards, headgear, chest protectors, shin guards, handguards, and groin guards.

Taekwondo uses a belt ranking similar to karate where fighters move through the ranks which are signified by six belts. Namely white (signifying purity), yellow, green, blue, red, and black (an accumulation of all the colors).

Taekwondo was one of the first martial arts to be included in the Olympics alongside Judo until more combat sports were added in recent years.

The national sport of Thailand, Muay Thai, is a powerful combat style used as a method of self-defense, in competitions, or mixed with other martial arts. Muay Thai is literally translated to “Thai Boxing” and fighters use their entire body as a weapon during fights.

Fighters learn how to practice patience and wait for the optimal opportunity to deal devastating strikes to knock out their opponent. Due to the wide range of strikes and the ability to do damage in small spaces, it is a great option for self-defense and street fighting.

Muay Thai was developed in Siam (now known as Thailand) by the army to give soldiers the ability to fight when they were unarmed during battle. While the discipline was created to protect the capital city from other kingdoms, the techniques soon spread around the city and the world.

General citizens began learning the techniques to exercise or practice self-defense and eventually the combat style moved around the world and became popular in other cultures.

The Fundamentals Of Muay Thai

Muay Thai is an aggressive style of fighting that can cause severe damage to opponents in unregulated fights. The style is often referred to as “The Art of 8 Limbs” due to the use of your entire body during fights.

The techniques found in Muay Thai utilize almost every part of your body, including your hands and elbows to deliver hard blows, your shins and forearms to act as a shield, and your legs and knees to strike.

Muay Thai also involves grappling techniques such as the full-body clinch to subdue your opponent. Using each part of your body to fight results in your body becoming the complete weapon against your opponent.

The rules of Muay Thai are not as structured as the PSS found in Taekwondo, yet fighters are still required to follow set rules. A fight is generally five rounds, while some competitions may reduce this number, you cannot go above this. Each round should be three minutes long with a two-minute break in between.

Standard Muay Thai gloves need to be worn that are a minimum of 6 ounces. During matches, fighters can wear protective gear including a groin guard and mouthguard.

During matches, Muay Thai fighters wear shorts similar to boxing shorts with the addition of a sports bra or tank top for women. The gloves may look similar to boxing gloves. However, they consist of more padding to protect fighters from heavy blows.

Underneath the gloves, fighters wear hand wraps for extra protection and, often during training, fighters will wear shin guards to prevent injuries.

Muay Thai is viewed as the fastest-growing martial art in the last 80 years and is commonly used as a form of exercise.

Muay Thai was developed from Muay Boran, which is an even more aggressive fighting style that has fewer rules and more lethal blows, which include the use of the head as a weapon.

The most commonly used form of striking amongst MMA fighters is Muay Thai.

Muay Thai and Taekwondo are very different fighting styles which both have strong cultural roots. While both have become popular around the world and in the MMA ring, the style you choose should depend on your preferences and how you will use the techniques.

If you are looking for a less structured style to protect yourself on the streets, then you should opt for Muay Thai. However, if you are looking to compete in tournaments and enjoy a more extravagant fighting style, then Taekwondo will be better suited for you.