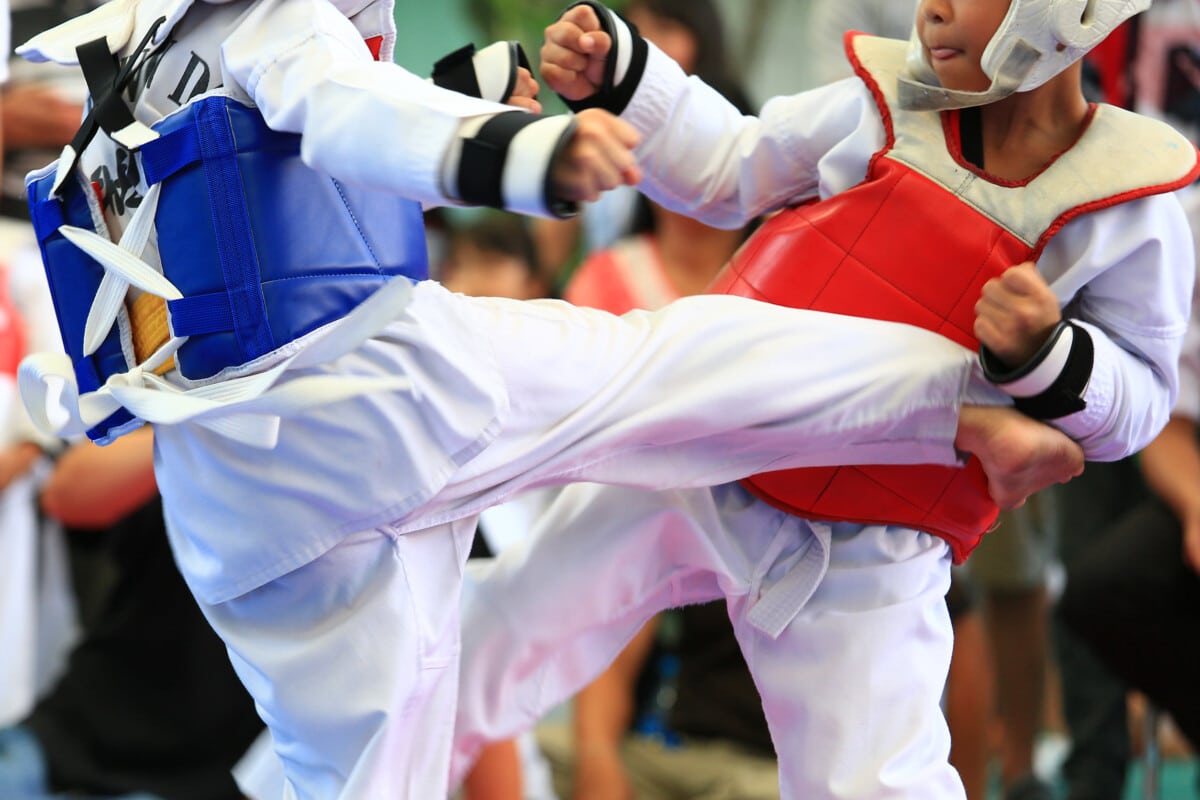 When choosing a martial art form to learn, whether it is for self-defense, discipline, or exercise, there are many options to choose from. With all the information out there, it can become very difficult to choose the best form for you. Here is a succinct overview of the differences between Taekwondo vs karate.

These two different martial art forms can sometimes be confused as they do offer many similarities as well. This is often true for most martial arts and the result is that certain fighters will mix these forms to develop their fighting style. This is true when it comes to MMA, which is literally Mixed Martial Arts.

To help you decide where to begin your journey into martial arts, or which discipline to learn next, here are the major differences between Taekwondo and karate.

The Main Differences Between Taekwondo Vs Karate

The martial art form primarily uses legs to perform extravagant and well-timed kicks including spinning and jumping kicks. While the arms are used for striking only as a backup when needed. The fighting style is based on the theory that speed will land heavier blows than mass can. This means the discipline focuses on speed and agility rather than the strength of the fighters.

The history of Taekwondo dates back as early as 50 BC, where records show the practice of this combat method being used. Taekwondo translated loosely means the way of the hand and the foot, since “Tae” means kick, “Kwon” translated means to punch with the hand, and “Do” refers to the act of doing something.

The traditional style of Taekwondo was banned by the Japanese military when they occupied Korea toward the start of the 1900s. While certain practitioners continued the fighting style in secret, the discipline was later re-developed with the influence of Chinese styles.

The modern Taekwondo that is practiced around the world today was developed in 1995 by two Kwan masters.

The theory of speed over mass was developed by Choi Hong Hi and was labeled his Theory of Power. Along with this principle of developing speed rather than strength, there are a few other fundamentals of this martial art form.

Fighters are taught early on about the relax-strike principles, which value the need to stay as relaxed as possible in between strikes, defense, and any other movements. This technique allows the fighter to conserve and build up energy for the next strike.

The martial art is often seen as quite a spectacle due to the extravagant high kicks, which create a very entertaining sport to watch.

The standard Taekwondo rules and regulations for competitions are often set by World Taekwondo who is also in charge of enforcing the rules for the Olympic Taekwondo tournaments. While the rules differ slightly between tournaments, such as the Olympic arena only allowing a small set of moves, there are a few standard rules across the sport.

Each match is fought on an octagonal field of play to allow for extensive footwork and broad movement. The match is decided by the Protector and Scoring System (PSS). This technology is attached to the clothing of the fighters to automatically send points to the scoreboard when strikes and kicks are landed correctly.

Points include the following:

Due to the extensive nature of the kicks and strikes of the sport, fighters are required to wear several items of protective gear including:

Fighters also wear standard uniforms depending on the tournament or competition.

Taekwondo is often used as a base training style for some MMA fighters, and while Taekwondo leads to fewer injuries than MMA, it has a higher injury rate than soccer, hockey, and basketball.

In the UFC, the current Strawweight champion (2021), Rose Namajunas, started her fighting journey with Taekwondo. The Mexican featherweight fighter, Yair Rodriguez, started practicing Taekwondo when he was five years old.

The focus of karate is to strike your opponent using both your hands and feet, which may include elbow and knee strikes. These moves are both decisive and direct due to well-planned out striking techniques.

Karate was developed roughly 500 years ago on a Japanese island called Okinawa. The spoken history suggests that the combat style was developed when the King at the time, King Shoha, banned weapons to prevent war. Thus, hand-to-hand combat was developed as a self-defense tactic.

However, karate was not solely created by Japanese influences and due to the exposure to Chinese culture, there was some influence from this side too. The Japan Karate Association was developed in 1949 as one of the first official bodies of the combat style. From this, the discipline spread across the world, and different styles were developed.

Karate is somewhat based on the philosophy of Budo, which extends the discipline beyond simple self-defense and fighting methods. It describes the martial art form as an idea of searching for personal improvement and development. Karate can be translated to “empty hands”, which refers to the emptying of the mind. Thus, karate is about learning more than fighting techniques.

While elements of karate can be used in MMA and is a great self-defense technique, you should be willing to improve your character as well as your strength, coordination, and stamina if you choose to learn this discipline.

The World Karate Federation (WKF) is the main body that regulates karate around the world, providing guidelines and rules to major competitions, including the Olympic Games. Karate takes place within a matted square with a referee on the mat and judges outside of the square.

Other ways to win include rendering the opponent incapable of fighting or if your opponent is disqualified.

Fighters wear a standard karate uniform which can be approved by the WKF, this uniform is known as a karate-gi. The uniform consists of pants, a jacket, and a belt, called an obi, which denotes the grading of the fighter. As they progress through their journey, they receive a higher grading.

Weapons traditionally have a place in karate but are not used in official matches. However, during training, you are likely to get acquainted with a bo staff and a nunchaku. These are padded, to begin with, but eventually, you progress to using the real weapons.

Karate is not useful to be used directly in MMA, however certain aspects of the discipline can be used in an MMA ring. Karate stances and footwork are two elements that will help MMA fighters dodge their opponents as well as keep their minds calm and focused.

Karate and Taekwondo are martial art forms that extend beyond fighting techniques and help teach fighters about discipline and philosophies that fighters can use in everyday life. Karate offers more of these daily practices, while Taekwondo is a more extravagant art form in the ring.

Whichever form you choose to learn will offer unique kicking and striking abilities and will help you improve your overall fighting techniques.